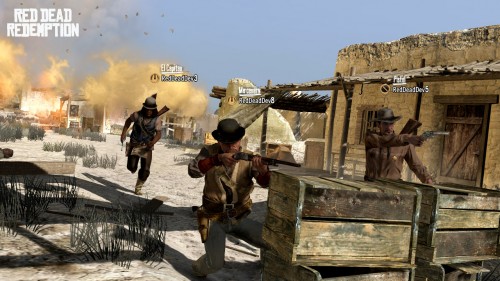 Resumen
‘Outlaws To The End’ is the first of several upcoming DLC packs for Red Dead Redemption and will be completely free to download via Xbox LIVE and Playstation Network. The ‘Outlaws To The End’ pack allows up to 4 friends to tackle new missions together, complete player challenges and earn new achievements/trophies. A total of six missions will be available when the DLC launches on June 22, but only 3 were on display during your hands-on time.

Nuevas Caracterísitcas
* Revival/Bleed out: In co-op, if a player is mortally wounded, he will not instantly die. Instead, teammates have an opportunity to revive fallen comrades for a limited period of time. Once a player falls, a timer will appear over their avatar and slowly deplete. Once the timer is up, the character is permanently dead unless a fellow teammate reaches a checkpoint. Which leads us to…
* Checkpoints: These work a little differently in co-op than what players are accustomed to in the single player campaign. Checkpoints in co-op act as a respawn point for any fallen teammates. For example, if 3 players are killed in a firefight, but the last standing teammate finishes off the remaining foes and reaches a checkpoint, all his comrades will respawn. If all 4 players are killed the mission must be started from the beginning.
* Medals: Completing co-op mission earns players medals for performance as well as XP bonuses. Earning a silver medal or better unlocks new playlists with advances weapon load-outs for each class.
* Advanced Co-op: Once all co-op missions have been completed at least one time the Advanced Co-Op Missions playlist unlocks. This playlist contains all the same missions, but with harder AI and expert targeting forced on. These really ratchet up the difficultly and are a much tougher challenge.

Clases de personajes
For the first time, players will have the option to select a character class prior to the start of each mission. Each class begins with a distinct load out – a set of weapons and equipment unique to that particular class. Generally it is considered wise to bring a diverse group of classes into each mission, as players will encounter shifts in scenery that will call for new strategies and tactics.

Misiones
Ammunition – The Mexican Army has the town of Tesero Azul under siege. You and your comrades are pinned down, caught under heavy artillery fire and enemy reinforcements. Your first goal is to clear the town of all hostiles while avoiding enemy artillery blasts from the ridge. Once completed, the next phase of the mission shifts to clearing out the Eastern and Western fortifications surrounding the town. These areas are rife with snipers, riflemen, and gunners on mounted Gatling guns. Once the flanks are secured the final phase of the mission begins, prompting one of your team members to grab explosives from inside the town and plant them on the high ridge amidst the opposing artillery encampment. The mission concludes once the camp is secure and the explosives detonated.

Walton’s Gold – Walton’s gang has taken control of a small mining camp rich with gold. Fight through the camp while avoiding sniper fire from the ridge and mounted Gatling guns near the entrance to the mine. Once inside, pile as many bags of gold as you can into a mine cart while fighting off waves of Walton’s cronies. Be quick, the mine is rigged to explode! Once safely outside the mine, defend your newly acquired riches from Walton’s reinforcements.

The Escape – Interrupt an arms deal and steal a coach full of gold, with the option of using a second, Gatling gun-equipped wagon for protection. Turn the gold in to the American Army and clear out remaining resistance in the town of Tumbleweed. The battle at Tumbleweed involves cannons and Gatling guns. After a classic double-cross that ends in a stand-off, escape with the Gold Coach to Mexico, battling Army soldiers the entire way.

The Herd -Cattle rustlers have taken control of Box Canyon. Fight your way in and wipe out the rustlers, then use teamwork to protect the herd as you lead them home to Armadillo under heavy fire – watch for snipers on the ridge, and reinforcements on horseback.

The Kidnapped Girl- Another gang has taken over Fort Mercer, and they’re holding a farmer’s daughter hostage. Charge the fort and eliminate the gang’s inner stronghold, then fend off reinforcements as you transport the girl by stagecoach to her home at Ridgewood Farm.

The River- Use a raft to head downriver, taking out rebel encampments along the way until you reach the rebel stronghold of Nosalida and a final epic battle for the town’s massive weapons caches. Watch out for Gatling gun-equipped enemy rafts. 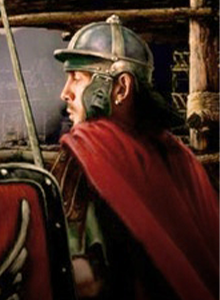